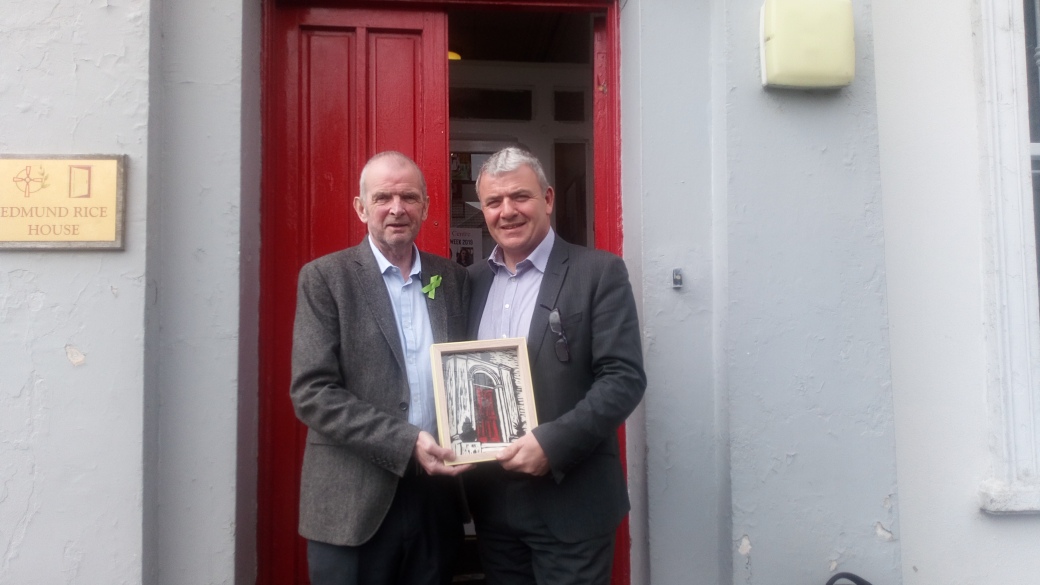 We’ve tried to prepare young people for the reality that they might go to Oberstown.

We’ve sat in court and seen young people sentenced or remanded there.

We have written letters to Oberstown.

We have visited young people there.

But today we had our first visitor from Oberstown….

Pat is a direct and straightforward communicator. He talks at length but doesn’t throw words around wastefully. It is clear when listening to him that he doesn’t need to prepare or choose his words carefully-he is speaking to what he knows and what he believes in.

Pat speaks a lot about journeys. He describes openly the turbulent journey Oberstown has been on as three institutions became one campus-the journey we’ve all watched play out in the media-he speaks about this part of the journey without defence or apology. He invites us as an audience to name the worst things we have heard about Oberstown-no one holds back, he has asked after all and it seems clear he can take it. He then refers to each terrible thing-he doesn’t try to dispel, dispute or argue but simply gives us some context and therefore a more nuanced and human understanding.

Pat neither dresses things up nor plays them down. He describes for us some of the hard realities about youth detention and what can be required to keep young people safe. Some of it sounds alien, unpleasant and more than a little surreal. He unravels it as best he can through the use of a metaphor.

He encourages us to think about what happened the last time we were leaving the country and passed through an airport. You don’t bring everything just the basics. There are things you are not allowed to bring. You have to be able to identify yourself. Your bags and you yourself have to pass through security. Once you have done so your movement is restricted and there are rules you have to follow(eg never leaving your bags unattended) but you are still allowed movement and freedom within the limitations of where you find yourself.

And while of course this doesn’t explain everything about Oberstown it does make it sound a little less surreal, a little less scary and a little bit easier to understand-and I immediately think of how useful and comforting it might be to have it explained in this way if you were young, frightened and had experienced lots of difficult things that had led you to the gates of Oberstown.  And I am heartened to think that some of the scared young people I have known and will know might have it explained to them in this way.

Pat refers more than once to rules and the fact that they need to be followed-and we might well expect a punitive or ‘’tough love’’ message when we’re talking about youth detention-we have all heard the rhetoric about detention not being tough enough! But this is not what I am hearing-I reflect later and I am pretty sure what I heard is that there are rules, young people are held to certain standards of behaviour, things are expected of them. And I know I also heard about standards and expectations that staff are held to and that Pat holds himself to. He says ‘If I say I’m going to do something I have to do it.’ And Pat is referring here to sitting through the night with a young person in distress if this is what you have promised to do. But I don’t doubt and have experienced myself  the power of following through on what you have said you will do in all kinds of situations.  It makes me think of something Dr Treisman says about being trauma informed ‘Every interaction is an intervention’

And I have yet to spend an hour in Oberstown but I know this is how mutual respect and understanding is built between adults and young people. I know this is how real relationships are made. And that makes me hopeful that change and positive things can happen even in places I might not want young people to find themselves in.