Delighted to share this article demonstrating the strength, resilience and talent of our young people.

MORE than 6,000 students are taking the Leaving Certificate exams and among them will be a number of students from the Cork Life Centre.

Cork Life Centre is an organisation who works with people to achieve their State Exams against all odds.

Because as we all know, studying for your Leaving Certificate is a big job, but for some people who already have their hands full with personal problems, it can seem like an impossible task.

The school helps students overcome a number of issues ranging from mental health to behavioural problems to excel at academic endeavours.

Director of the Cork Life Centre Don O’Leary said it’s great to see young people from the centre working towards their goals.

“Here are the centre, we like to work to the strengths of the individual, one size does not fit all.” Don said anyone who has completed the Junior Certificate programme at the centre has wanted to go on to do the Leaving Certificate and he thinks this is down to the ethos of the centre.

“Our discipline is very different, we have one rule at the centre and that is respect. Every day is a new day, something happens it is dealt with and then it is gone.” Since 2006, the centre has been increasing its numbers and this year the centre had to turn away 138 students from their door because they do not have the resources to handle the demand.

Open since 2000, 125 people have completed their exams through the centre and on the day of the exams, Don had this advice for people sitting down to their tests.

“My advice to students is not to worry, you have the work done and remember, exams do not determine who you are going to be.” 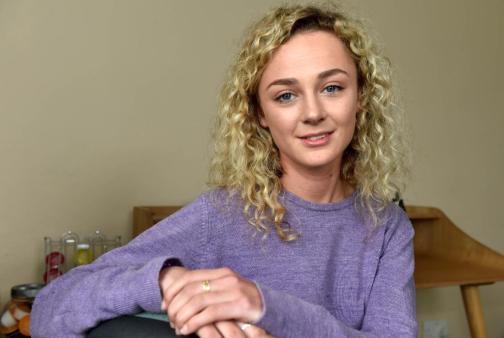 Sitting the Leaving Certificate is something Emma Doyle always wanted to do, but for awhile it did not look like a possibility.

Eating disorders, cyberbullying, self-harm, drugs and anxiety are just some of the obstacles that cluttered the path of Emma’s education, however, the teenager persevered against the odds to continue learning and now looks set to follow her dream of studying law.

The trouble has already started by the time Emma reached secondary school.

In sixth class, Emma’s friends had told her she was fat and she developed an eating disorder that plagued her for a number of years.

As well as this, Emma started to self-harm in an attempt to gain control over her situation. “I felt like it was the only way to deal with it. It gave me control over what was going on. I was going to see counsellors as well, but nothing could take away the pain.” Then Emma was the victim of cyberbullying. Through various social media networks, including AskFM, other children ridiculed Emma and left her feeling trapped and alone.

Emma was also pushed and laughed at in the halls of her school.

“Things became unbearable and I tried to take my life.”

Emma took a concoction of pills, including antihistamines and paracetamol, which made her muscles knot in her sleep and she woke her mom up screaming from her bed.

After this Emma moved to another school in her area. The day Emma came out of hospital, she had an interview to go to a new school.

“I looked up to this school, I thought it was an amazing school and the girls there seemed to have everything that I wanted to have.

“For awhile everything was good. I did my Junior Certificate and had a lot of fun in Transition Year, but then things started to change.

“I was segregated from my classmates, deleted from my group chat and loads of other things like that that just made me feel like I had no self-worth.

“I started taking drugs to get relief from what was going on in my head. I wanted to lose more weight and I wanted to feel a sense of happiness.” Emma tried to take her life a second time. This time Emma took a number of pills and tried to hang herself, but she was found by a neighbour who was asked to check on Emma by her mom.

Then Emma says she had an epiphany.

“I started to see what that life was like, and I realised this wasn’t for me and I was tired of trying to control my brain.” Emma left school and started working full time in hotel.

“School was destroying me, I was depressed from it so I started working, which I liked. It was good working every day, getting up and getting paid, but it was never a solution.

“I always wanted to do my Leaving Certificate.” Then Emma found the Cork Life Centre through a friend of a friend and everything changed.

“The contrast to myself a year ago is unbelievable. I have just flourished. I was going nowhere and now I am going somewhere.

I see things in a different light, I am more relaxed, at ease. I am progressing.” Emma said she now realises that the Leaving Certificate is not everything. “I know it is important, but I also know that I have a million other options available to me, such as volunteering in Africa or India.

“I am more grounded now, more myself. I’m not afraid, I’m going to do what I want to do and I am excited about what is ahead of me.” Emma said she loves the way things are done at the Cork Life Centre. “I love how teachers treat students, we sit, eat and learn together. It is community-based, we are a family.”

Speaking about mainstream schooling, Emma said it was a flawed system. “You are assessed on your ability to learn something and transcribe it and I think that is unfair.”

Studying at the Cork Life Centre also helped Emma’s relationship with her mother.

“Our relationship used to be very frayed. I was robbing money from her, she was always worried about me, ringing people trying to figure out where I was. She nearly had a mental breakdown over it.

“Now our relationship is at its peak. I love her to pieces and I tell her everything. Without her none of this would be possible, she is my role model.

“This school has made me flourish and be a better person than I ever thought I could be.”

Eighteen-year-old Colm O’Brien is about to sit his Leaving Certificate, but without the Cork Life Centre, the chances are he would not be in this position.

Mainstream schooling didn’t suit Colm. From the moment he started in first year, he felt like a fish out of water.

“The social environment was very different, but I thought I would adapt. However, by second year I was missing a lot of school.

The hardest part for me was simply getting there. I had no motivation. I found it terrifying the thought that this was my life for the next few years.

“Individually, the teachers were okay, but collectively it was overwhelming. The school was too big to be comfortable.”

Colm began asking his father, who is a teacher, to homeschool him, but his family came up with an even better idea.

“My sister knew someone volunteering at the Cork Life Centre and she suggested I give it a shot.” Colm went for an interview and started on the afternoon programme for the remainder of second year before switching to the morning programme for third year.

Colm said he preferred it to normal school.

“The school’s attitude doesn’t fixate on exams and the socialising in the morning helped me to be more social.” At the Cork Life Centre the teachers and students eat together and they have a number of breaks throughout the day to chat.

Colm said he enjoyed getting to know people and also enjoyed the classes. “The classes used to be one to one which is great, they are not anymore, because we don’t have the resources, but I love to talk and I had great conversations with my teachers.” Since joining the Cork Life Centre, Colm said he is a much more confident person.

“I am less insecure and more able to deal with stuff.” Colm said his parents always remark about the change that has come over him since he joined the Cork Life Centre.

“They are always saying about how different I am now, more confident and chattier.” As well as getting his education, Colm also took part in some extracurricular activities at the centre.

We go down the Meitheal Mara, the Cork community boatyard, once a week for the past two years and have been helping to build boats.

“It was a lot of fun and a very unique experience to be a part of.” Colm will be rowing one of the boats that he helped to make in the Ocean to City race taking place this weekend.

Along with a buddy, Colm will be rowing 14km in his currach.

“I’m looking forward to it, but I think I probably should have done more training for it.” Colm, who plans on being a musician, and is going on to study Music Management and Sound at Colaiste Stiofan Naofa, was just learning guitar when he started at the education centre and has since put together an album of original songs called Reflection in collaboration with the organisation.

The 18-year-old also took a trip to India with the Hope Foundation while studying at the centre.

“I found the experience overwhelming. I had never been in different country before so I had a lot to take in, but I enjoyed it.” Speaking about the ethos of the centre, Colm said some of the reasons it works so well is because everyone gets on and the teachers take an interest in the students.

“They are very sensitive to thoughts and feelings.” Colm said the Cork Life Centre has a healthy approach to exams. “They are taken seriously as part of the system, but we all know they are not the be all and end all. We have other options available to us.”